404 Nature walk in the Netherlands

Nature walk in the Netherlands

As I mentioned on Thursday, we celebrated our 4th on the 5th with some expat friends in the Netherlands. We all had a great time. My son enjoyed playing with the three of The Three Under, and my husband and I enjoyed adult conversation with Farrah, her sister and her husband. We made plans to eat at the pancake house Farrah raves about for lunch on the 6th. What did that mean to us? It meant that we needed to work off both the food we ate on the 5th (delicious bbq chicken and guacamole – oh how I have missed guacamole) plus all the food we were about to consume at the pancake house.

Fortunately our hotel (a last-minute switch when we discovered the hotel we originally booked was over an hour away) was right next to trails. The trails were laid out in a spiderweb design. We started at one of the outer rings, found our way to the center where there was a small open area with a grotto in the middle, and then randomly selected web veins (both wide enough for several people, and less structured veins) to explore. We stopped often to watch bugs, pick up pinecones, get out of the way of the multiple running groups, and wave at the big trains going by. Since we live in a city and more often visit other cities, it’s rare that we get this close to nature. Yes, it was just a small wooded area, but it was just the thing our family needed after the extended winter and rain. Did I mention it was a beautiful, sunny day?

Here are some pictures from the trails:

Our hotel fit in with its surroundings. This is a view from the back.

When we set off on the trails, they were pretty wide.

After a short time, we found thinner trails to give us a small sense of adventure. And to keep out of all the joggers way! 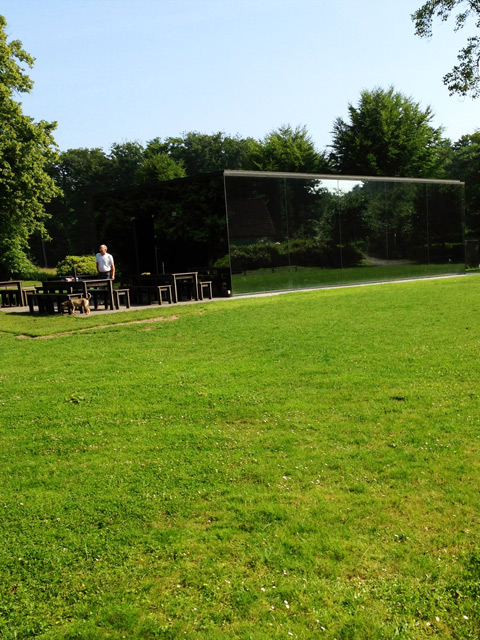 The Grotto marked the center of these trails. We didn’t stop for a drink, but (contrary to the picture above) many people did.

This popular Dutch bike “bakfiet” holds the little ones. This was the only one we saw on the trail, parked while the family enjoyed a snack at the Grotto.

Our little one stopped every few seconds to examine some part of mother nature. I want to remember how he would see the tiniest detail, jump off his bike, and get on all fours while staring at it. If whatever he was looking at didn’t move, like this pine cone, he’d pick it up. If it moved then it was likely a bug and he would be both disgusted and intrigued at the same time. One bug that especially mesmerized him was a tiny spider. He’s seen big ones before, but this tiny one was almost too much for him. He could have watched it for hours if we didn’t have to check out of our hotel.

On one of the benches on the trail, one of the jogging groups left their bottles of water. Since we often saw them running circuits, I’m sure the waters weren’t left unattended for too long. And since it was warmer than it has been in a long time, I’m sure those bottles were quickly emptied.

I’m glad our short trip to the Netherlands included this excursion. Although we have never been to Tilburg and could have tried to explore the city, we were happy to be out with the locals enjoying nature. And we found yet another reason to love the Netherlands. The people on the trail were extremely friendly, the trail itself was clean and well-maintained, with plenty of spots to rest. And the pancake house we went to later? Delicious!